How to attach the Model of 1907 Sling to the Rifle

I bought a nice 1907 sling for my Garand.  I know how to assemble it and all that, but the two-piece/brass hook arrangement seems overly complicated when compared to, say, a Swedish Mauser sling.  Can this sling do something that a "normal" sling cannot?

The US sling is singularly adapted to steadying one's aim in position shooting.

I have in front of me as I type this the "Imperial Army Series (Based on Official Manuals): Musketry (.303 and .22 Cartridges); Elementary Training, Visual Training, Judging Distance, Fire Discipline, Range Practices and Field Practices, Based on Musketry Regulations" (1915).  In no case is the sling used for support whilst shooting from any of the positions.  It's a carrying strap that just hangs there.  So the Brits were in the dark about the use of the sling as an aid to marksmanship, at least in 1915.

I suspect the Germans were too. 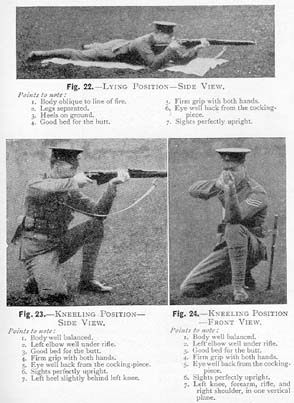 British (non) use of the sling for position shooting, circa 1915