Q. How can I tell if an M1 or M14 receiver is a re-weld? Updated Again! And yet one more time!

There are a lot of re-welded receivers out there, but identifying them is often difficult. Since I've done a lot of looking over the years, and seen some few of these, I'll try to summarize my experience.

To understand re-welds, you must know that most receivers destroyed by the government have been cut or torched in the rail section. Clever folks often think they can get a useable receiver by re-welding two receiver halves (from the same or different original receivers) back together.

The problems with this action are manifold. First, the M1 and M14 actions were designed to be manufactured to fairly tight tolerances. When a re-weld is assembled, there are six degrees of freedom that have to be matched perfectly between the two halves. Second, the original receivers were heat treated and case hardened, the latter operation making re-welding a technically difficult action resulting in cracks if done wrong (and generally even if done right! --ed.). Finally, assuming the welder overcame the preceding two hurdles, he'd have to re-heat treat the receiver, and re-case harden it, non-trivial operations not likely to be done well by your average shade-tree welder.

Furthermore, there were several different steels used in the production of the M1, some of which cannot be compatibly welded together, I'm told. This could be an issue if a Winchester rear receiver were matched with a Springfield front receiver (or vice versa) resulting in a "Winfield" or "Springchester" re-weld - these can be spotted by a mismatch between the drawing number on the front of the receiver, and the serial number/maker of the rifle.

From the Editor: Here is an example of mismatched numbers. The serial number below, 4238703, dates the rear half as having been manufactured in late '52 or early '53. 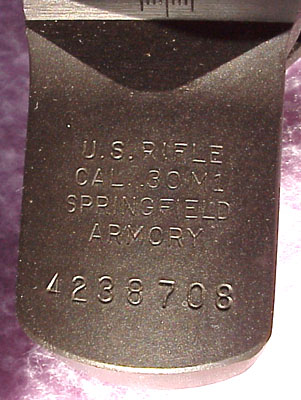 The drawing revision number, 27, on the other hand, indicates the front half was made sometime between early to mid-'43.

"Springfield Drawing Number with Dash 27 Revision, from Early to Mid-'43"

The knowledgable buyer--or one with Scott Duff's "Serial Numbers and Data Sheets"--will immediately recognize this as a re-welded receiver without looking further!

Most re-welds are obvious - the left hand side rail of the receiver will show signs of welding, pinholes, and grinding. Often cracks will be apparent in the area of the weld. Sandblasting is sometimes used to cover the weldment marks. (A common giveaway is a "step" or discontinuity in the line of the clip latch recess --ed.)

From the Editor: The op rod side of this receiver reveals grind marks, discoloration, an uneven rail and a welding inclusion! 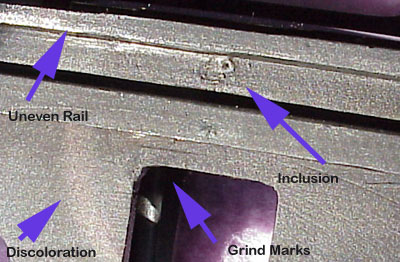 "Op Rod Side of Rewelded Receiver"

Similarly, the clip latch side of this receiver shows grind marks and an uneven receiver rail. Even the best re-welds will show milling marks in the thin web between the receiver legs, on both sides. This receiver's marks are very obvious. I've seen at least one that was unnoticeable except with strong light and magification. 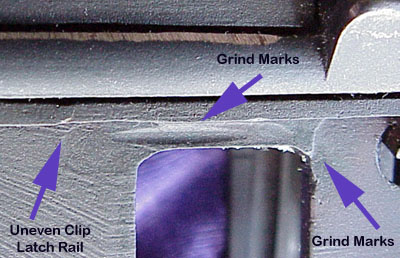 "Clip Latch Side of Rewelded Receiver"

What may not be obvious from this picture is that the clip latch slot is also uneven. You can see this most clearly on the lower edge of the slot.

However, there are some "skilled" welders out there, who can produce a good-looking weld that can be refinished to hide the weldment. If you suspect a re-weld, it's best to disassemble, degrease, and look at the inside of the action - much harder to remove the weldment marks, there, as there isn't easy access for milling and polishing. A straight edge (I use a six inch machinist's square) can help you detect twists, warps, and yaws that may indicate a re-weld.

I've seen some really good looking re-welds of M1 and M14 receivers - several couldn't be detected by external visual inspection, but all but one could be seen internally.

The single re-weld that was clean externally and internally was detected by (a very slight) misalignment of the rear of the receiver (those six degrees of freedom), and, when magnafluxed, showed extensive micro-cracking on each side of the weld, in each rail.

Frankly, I'm always cautious around any M1 receiver that lacks regular and notable milling marks, as these are the first to go when someone starts grinding and polishing or sandblasting to cover the re-weld. This varies from maker to maker, with the late original H&R receivers having a near-commercial level of removal of machining marks.

Note that there are very few "real" M14 receivers (original USGI, that is - clones abound) out there, and that most (if not all) of them are classified as machine guns by the ATF, so finding a non-re-welded, non-machine gun original USGI M14 receiver is extremely unlikely.

Look at lots of rifles before you buy any - you'll begin to get a feel for how an M1 (or M14) should look.

All re-welds should be considered wall hangers or expensive parts sources. Period. As Jerry Kuhnhausen said, "There are no good re-welds."

From the Editor: This particular rifle was also equipped with a composite barrel, a two-groove M1903A3 barrel sleeved into a Garand barrel back end stub. The picture below shows the area in question.

Note that the barrel is inverted; the barrel date on the original stub was stamped upside down! The next picture shows the seam very clearly. 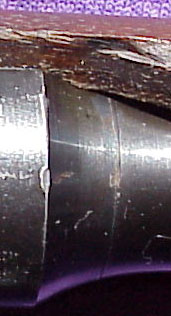 There are those who do not object to this procedure. We at Fulton Armory are not among them.

Interesting timing on the reweld story. I recently discovered that the first M1 I purchased is a reweld. In 1991 I bought an M1D. I had no previous experience with M1's and was having a hard time locating someone familiar with them, from whom I could learn. Most of the books and references I now have (Duff, Canfield, Kuhnhausen, Harrison, Fulton Armory site) were not yet printed. I eventually learned where and what to grease, how to adjust the M84 scope, etc.

The rifle did two things I was having trouble reconciling:

In December '98 I sat down with the M1D, Kuhnhausen's Shop Manual and my CMP M1 for comparison and started working my way from the gas cylinder rearward trying to figure out why the op rod on the M1D would dismount. Everything seemed groovey until I put my steel machinist's rule along the groove the op rod travels in. Then I found the three photos in the Shop Manual about rewelds. It had never occurred to me. Yup, two different types of milling marks front and rear. The receiver legs were not quite parallel when viewed from the side. Grinder marks under the clip latch. And, now that I was looking for signs of a reweld, the mottled coloring looked more like annealing.

The last straw was when I noticed the drawing number, D28291, didn't match the serial number! No 65 prefix for the 4 million serial range. YUP! I got skunked six years earlier an never knew a thing! I've been telling myself that it's like learning to play pool or anything else --it's gonna happen unless you're careful or have some kind of mentor. AND all the info available now just didn't exist then...

--Geoff, be grateful you're not the correspondent in France who found himself out US$3,000 on a completely bogus M1D! --Ed.

The D parts are now living on a new receiver (and it's amazingly accurate!); the reweld receiver is a wall hanger.

Have just been looking at the Fulton webpage. Thank goodness someone agrees with me on the M1 rewelds! I have tried to tell dozens of "proud" owners that they have junk - the result usually is the same as calling the guy's wife names.

In two cases, the owners insisted on having receivers magnafluxed to prove me wrong; in both cases, I was right - they were rewelds.

There is one more point on the rewelds other than the ones you mention. If the receiver is shortened in the cut/weld process, the firing pin may be able to reach the primer before the bolt is locked, that is when it is not yet in the safety cutout in the receiver. The result could be nasty.